Since their debut in 1979 the Gesualdo Consort have established themselves as leading interpreters of the music of Gesualdo and his contemporaries.

They have appeared at major festivals all over Europe including the Prague Spring Festival,    the Flanders Festival (in Rubens’ House, Antwerp), the Paris Festival Estival, the Bath Festival, the Maastrich Religious Music Festival, the Karlsrhue Musiktag, the Harrogate Festival and as guest artists in the Concorso Polifonico Internationale in Arezzo, Italy.

The Consort have made four commercial recordings. Their first, featuring music from Naples, was described by leading Gesualdo scholar Glenn Watkins as “a miracle: easily  the best Gesualdo recording to date”, and was a Gramophone Critics’ Choice. This was followed by There is no Rose (mediaeval English lyrics) The Food of Love (early Shakespeare settings)     and the complete madrigals of Thomas Vautor (with the Rose Consort of Viols).

They also feature on the Italia Prize-winning DVD Death for Five Voices, directed by Werner Herzog (Arthaus) originally made for ZDF in Germany. Most recently they have made a major BBC documentary Gesualdo: Musician & Murderer, and provided the soundtrack for a short animation based on the madrigal Belta poi. They have also performed live on BBC Radio Three's In Tune programme.

They recently travelled to the town of Gesualdo and Gerald Place gave a recital of Dowland   and Shakespeare songs in the restored castle, the composer's home, as the opening event          of the regional festival Irpinia Madre. 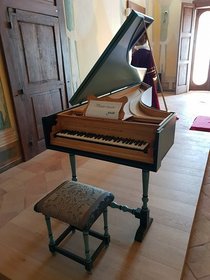 "Gesualdo as I had only ever

Gesualdo's music room in the castle